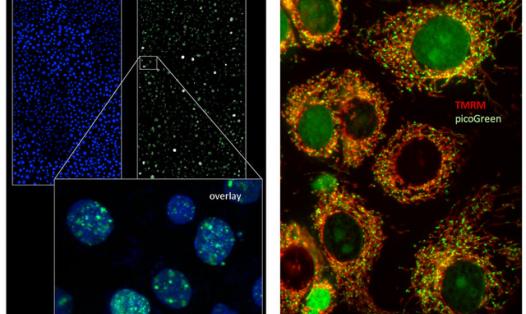 Supervisors
Dr Katiuscia Bianchi, k.bianchi@qmul.ac.uk, My research aims to reveal how cancer cells evolve to proliferate and evade cell death in order to develop new therapeutic strategies, in particular for the treatment of breast cancer., Queen Mary University of London
Prof Gyorgy Szabadkai, g.szabadkai@ucl.ac.uk, The overarching aim of my research group is to understand how transcriptional and translational regulation of the mitochondrial proteome (termed as mitochondrial biogenesis) is converted into bioenergetic and signaling responses of the organelle. , University College London
Project Details

ATR inhibitors (in clinical trials) have demonstrated a dose-dependent tumour growth inhibition when used as monotherapy mainly in ATM-deficient xenograft models, suggesting a role for ATM in inducing drug resistance2. While this ascertains that in patients with ATM loss/mutations the drug is more effective, on the other side it also represents a major limitation to its utilization. Thus, understanding how ATM mediates resistance to an ATR inhibitor is of major interest. ATM is also known as a major regulator of cellular metabolism, thus we will test the hypothesis that mitochondrial and metabolic changes linked to ATM deficiency lead to drug resistance. The expected outcome is to understand how changes in cellular metabolism may lead to drug resistance and identify new pharmaceutical routes to modulate cell sensitivity to chemotherapeutic drugs.

The student will have access to cutting technologies to develop this project: (i) the MS facility for metabolic flux analysis of the Barts School of Medicine and Dentistry, (ii) the Core Facility for Metabolic and Mitochondrial Studies of UCL and (iii) the DNA damage response unit in AstraZeneca.

Lab based work will be combined with bioinformatics to study the mitochondrial profile and metabolic fluxes of cells with ATM deficiency.

If given the choice between LIDo and any other doctoral training program, I choose LIDo every time

The LIDo Programme has revolutionised my view of modern biomedical research. It pushed me to step outside of my comfort zone and to explore research areas which I never considered to enjoy beforehand. My PhD project made me look at large biological datasets in a computational way and I do not regret a single thing I learned on my deep learning journey

LIDo cultivates a close relationship with the wider life sciences and technology industries to advise upon and guide our outreach activities and student awareness of tracks outside of academia, including entrepreneurial opportunities.

LIDo was perfect for me, because of its interdisciplinarity and the opportunities it offered!

LIDo helped me discover a new career path and learn new skills, that I never thought I would be interested in. LIDo has encouraged me to take more risks and experience new sides of research.

LIDo is like a huge extended family, everyone is willing to help each other out and offer advice which is particularly important when you’re faced with challenges in your research!

The best decision I ever made!

I never thought debating would be helpful to a researcher, but after a LIDo provided debate workshop I felt much more comfortable answering questions at a recent conference!

LIDo gave me the confidence to pursue a PhD in a field I would never have considered before. The sense of community the programme has to offer is second to none, fostering solid friendships and providing a platform to encourage one another along our journeys, both in and out of the lab.

From LIDo to Leaders in modern biomedicine